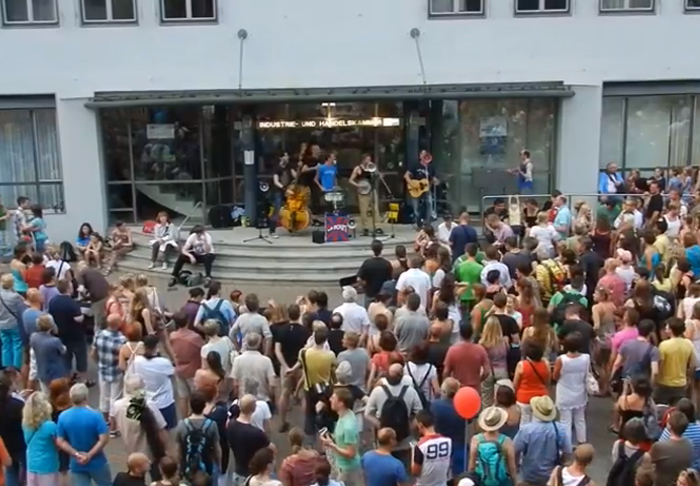 la-boum reminds you of something? Then you´re right. Remembering the phenomenous french film of the eighties, „la-boum – the party“, we founded our band in 1994, with the intention that our band name reflects the program. Every gig will be a great party: for the fans as much as for the artists.

We like to play gigs on festivals or open airs and we like to record our music in the studio. But especially in summertime we like to take our instruments (contrabass, banjo, acoustic-guitar, accordion, full-throat-voices, woodbox-bassdrum and snare) out on the street and you have the chance to join us – always cultivating the high form of unplugged-music-entertainment.

On their busking routes over the cobblestones of metropolitan cities in Europe, the six full blood musicians sharpen their styles. In wild joy they play on their instruments and animate the audience to maximum craze on the dacefloor. From Ska, Folk, Polka and Indie styles they cook a steaming bubbling musical pot and serve him hot and sharp. Banjo, Gypsyguitar, upright bass, accordion, standing battery and Washboard produce an unmistakable sound, like as if one could hear the dusty asphalt shining in the sun.

Only sounds that work well without electricity and on the road are played. Only songs which brings the incorruptible road public on to listening and dancing is taken up to the program. The speed and that characteristic rhythm which la-boum got, will make the ass of any couch potatoe start to move. From the ear directly into the legs and then later in the brain, if there is oxygen left. This way the sympathetic band brings joy, sunshine and a piece of the adventures of these street Guerillas troop on each stage, and thus into the hearts of the listeners. Soon each concert becomes fast a wild celebration, by the way, that's the meaning of the word " la-boum".

We mix up balkan, ska and independent music. Just click here to get an impression. You can listen to the songs out of our CDs.

la-boum is playing since 1994 now almost everything with in and beyond imagination, from busking in the cities, small art stages to big festivals with 100.000 visitors. The Style is influenced by many sorts of Music. Mostly Ska and Indie but also Rock'a'billy, Punk and Gypsy Jazz of the early 40ties. The music of la-boum is high-grade catching, on and even the grumpiest person will have to start dancing. you can not escape form this effect.

You like to write us? You want to know us better? You are a big big fan of la-boum? Anyway – if you want to have a good time and you want us to play in your city – whatever you want – Get in contact and we get the party started!